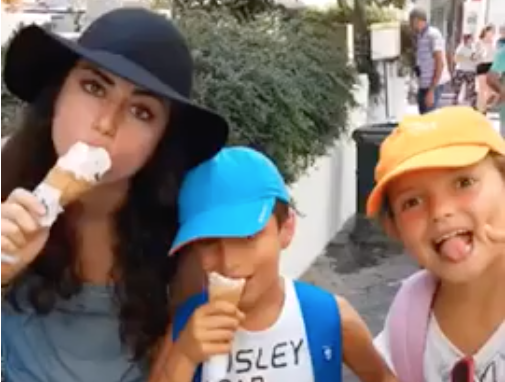 Shanny recently returned home to Mexico after spending two months as an au pair and tutor to a family in Italy.  GeoVisions asked our contributor blog extraordinaire to write a blog about saying goodbye to a host family you have created an incredible bond with.  Here's Shanny's story.

I have the idea that the struggle of the goodbye is proportionately hard as the time enjoyed while the moment of togetherness lasted.

The first, more powerful and long-lasting relationship we make is family, this unbreakable bond we share with those who gave us life and shower us its meaning. People affirm that we don’t choose family (or at least consciously, anyway), that we just get to choose our friends… but I disagree, in a way I think family chooses us. And that was what happened to me without even knowing when I became an au pair in Italy.

For two months I was an au pair abroad.  And living in this little corner of the world in Italy called Tortoreto, where I had the pleasure to become part of two amazing families: the Motta and the Faraone family.

My part in the family was to take care and give English lessons to 8-year-old and 4-year-old Matilde and Marta Motta, as well as 8-year-old Jacopo Faraone. During that time we developed a strong connection, they became my kids, my students, my brothers and sisters and my family.

This group of people open the doors of their homes to me, accepted me in their lives and allowed me to share my life with them, they were interested about my life, they cared about me and treated me as their equal…they became my "famiglia italiana."

I believe just a small amount of people in this world are capable of calling “family” and “home” one other than their original one, and I am blessed for being able to do that. Traveling and being open to this type of experiences is what allowed me to achieve this, but a traveler is not just it for being adventurous, having an open mind, heart and a free spirit or to discover and go to places. It is also what it is because of its strong capacity and will to let go, to say goodbye and live the moment with such enjoyment and plenitude that will last forever.

When time is enjoyed it runs faster, and my two months there happened in a blink of an eye, time came from me to say goodbye. My kids were the hardest part, since the impact they had in my life was enormous, and I believe my presence in their lives as well, regardless of the amount of time we were together. In those two months we were together all day, every day and we really got to know each other.

The way I see it, I not only say goodbye to the people I met there, but I also say goodbye to that place and not just because it became my home, but because it was the testimony of the changes I had there, how I grew, what I’ve learned and the experiences I lived. Everything had memories all over. I was afraid of leaving. It represented another chapter in my life completed, but I knew that the time for me to go home had arrived so I just flowed whit it. I was also exited to go back and share the person that I became along with all of my experiences with my family and friends. I was eager to put to test all of that knowledge I had acquired, to adapt and adjust my life and make it a new one.

This was definitely the hardest goodbye I’ve ever said in my life.  But I discovered the goodbye hurts but not because of that separation, but is the uncertainty that hurts: not knowing if or how long is going to be before we are reunite again, in what conditions will it be or even if I am strong enough to keep that promise of seeing each other again. That is what hurts the most.

I am 23-years-old and I have the rest of my life to live and return to see them again: I am curious of how life will turns out in both ends, who will they become in the future, how will my kids be when they’re older.
Because of the strong bond we made, there is no doubt that the promise of seeing each other again is held. For me it was not arrivererci, but a see you later, a ci vediamo dopo!

About Shanny: For two months, Shanny lived with a family in Italy and was a part time au pair, and part time tutor with the Walk and Talk program through GeoVisions. She lives in Mexico and recently graduated with a degree in tourism industry. Check out her adventures on Instagram: @shanny_neuman.