Doctor Who And Volunteer Abroad 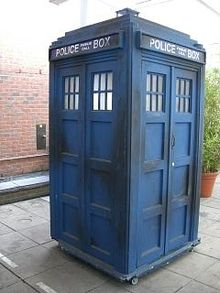 I need to publicly thank my daughter, Molly, who provided background for this post.

I assume you chose to take a look at this Post because you're a Whovian?

As if things could not get more weird with this Blog these days, I'm actually writing about volunteers going abroad who come home and say, "I thought I'd have more of an impact on the world by volunteering abroad."  And I'm doing it via an episode of Doctor Who.

Doctor Who is a long-running, British science fiction show that follows The Doctor, a time-traveling alien who is actually a Time Lord.  He travels in his TARDIS that looks like a British Police Box from the 1960s.  You'll see it in the video clip below as well as on the right.

People, (like my daughter Molly), who memorize each episode of 50 years the show has been aired are called "whovians."  People like me who watch only to make their son or daughter happy (but secretly like the show) I call "whosters."  We really haven't made it to "whovian" status.

But, back to those volunteers abroad...

But some return from their project disappointed.  Not in the cultural exchange.  Not in the trip itself.  But feeling like they made only a very small difference.  They had expected to show up with a group, dig a well and paint houses, and they returned feeling as though their work had hardly begun.  Not always.  But much of the time we hear these things from returnees.

Watching an episode of Doctor Who with my daughter, (Vincent and The Doctor) made me think about these returnees.  Because truth be told, if you only spend a day onsite...you're going to make a difference.  You won't find a cure for a disease, but you'll quiet a small child, make a worried parent smile, clean a supply closet that has been unused and dirty for years.

"Vincent and the Doctor" is the tenth episode in the fifth series of BBC One's, Doctor Who.  The episode was first broadcast on June 5, 2010.  (If you're a fan or care, this episode featured an uncredited guest appearance from actor Bill Nighy.)

So we have these volunteers abroad, returning to their home wondering what kind of impact they made when they were at their project.  And we also have this episode of Doctor Who, where Vincent van Gogh wonders if anyone would ever like his paintings.  (van Gogh died, never knowing he would be famous.)

The Doctor travels in the TARDIS with Vincent van Gogh from 1890 to 2010 to the Musée d'Orsay. Van Gogh is stunned at the display of all of his paintings, and becomes emotionally overwhelmed when he overhears art curator Mr. Black, (Bill Nighy) say that van Gogh was "the greatest painter of them all" and "one of the greatest men who ever lived". The Doctor returns an emotionally changed van Gogh back to the past.

Well, go figure.  With all that emotion and the fantastic song "Chances" by the group Athlete (and me hiding some tears) I just naturally thought of all those returnees who might never know the impact their day, their week, their month(s) would have on all those people and communities abroad.  And I was so emotional, I thought if they knew The Doctor...maybe they could get him to use his TARDIS to take them to their project a few years in the future.  I am convinced they would feel exactly like van Gogh from that episode of Doctor Who.  Just bowled over in emotion with the real impact they had from their gift of time and caring.

If you're at all interested, or if you've ever wondered the impact you have had on others in your life...watch this five minute clip from Vincent and The Doctor.  And maybe you'll become a "whoster" for a few minutes.

If we had the chance to go forward, all of us would be impressed with the impact we have had on lives.

Where would you go in the TARDIS?