Euro Cup 2012 - Get Involved When You Volunteer Abroad 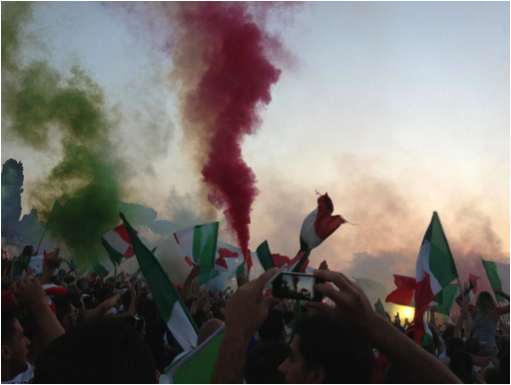 This is Briells Sydor's second guest post.  Brie was one of our counselors in 2012 on the Italy Summer Camp program. She got caught up in Euro Cup 2012 and explains that "getting involved" in local sports or actvities can increase your enjoyment of the cultural exchange.

For all of you sports fanatics out there: don’t worry about losing that sense of athletic unity and pride when you go abroad—most Europeans are even more spirited than you!

While I was participating as a summer camp counselor in GeoVision’s Italian Summer Camp program this past summer, I was fortunate enough to watch several of the Euro Cup games with the locals. Since I’ve grown up watching my brother play soccer, I thought I knew enough about the rules and intensity of the sport that I would fit right in with the Italians — I was wrong. Soccer—or rather, futbol—is more of a religion than a sport in Europe; everyone watches the games, has at least one jersey, and gets emotionally invested in the outcomes of the matches. The Euro Cup was no exception. 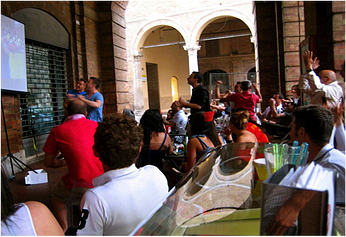 As a volunteer abroad in Macerata, our group of counselors went to a fun restaurant/bar in the center of the city to watch one of the playoff games. A huge projection screen was set up to air the game and all of the tables and seats were occupied well over an hour before kick-off. At the start of the match, everyone in the bar stood to sing the Italian national anthem; it was a beautiful moment of patriotism followed by booming cheers and chants for the team. Over the next few hours, Italy battled Spain through two intense and competitive halves, with the final score resulting in a 1-1 tie. Little did we know, these two teams would meet again in the finals of the 2012 Euro Cup.

Fast-forward about a month to me living in Rome, with Italy and Spain facing off in the Euro Cup Final that evening. My roommates and I spent the day buying our first Italy jerseys and stocking up on Peroni—an Italian beer—for the game. I also took some time to peruse the homepage for European futbol and a great guide if you want some quick facts on the league. 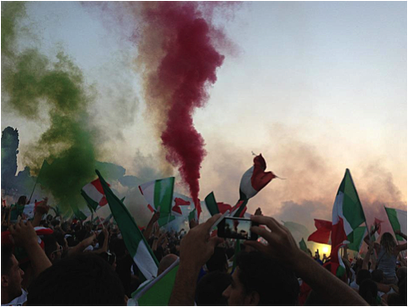 About an hour before the start of the match, the three of us ventured down to Circo Massimo, a huge open venue near the Colosseum. IT. WAS. INCREDIBLE. Thousands of Italians were waving huge flags and setting off red and green fireworks; 4 Jumbotron screens aired the game high above the crowd; horns, cheers, and the Italian sports announcer’s voices filled the air. Despite attending an array of college and national sporting events in America, I had never seen anything like this. The enthusiasm and national pride that emulated from the crowd was truly a life-changing experience, and I felt so fortunate and honored that I could be a part of a moment that exhibited this part of the Italian culture.

Unfortunately, that level of excitement and optimism was crushed by a 4-0 loss to Spain. As we filed out of Circo Massimo, it was difficult to comprehend how a stadium that had been overflowing with energy just a few hours before now fell silent and desolate. Even as a bandwagon fan, I felt defeated and could easily detect the new aura of dejection throughout the city.

So, for all of you other traveling sports-lovers out there: get involved. Go see a game or watch one at the local sports bar. Grab a jersey and a beer and (attempt) to sing the national anthem with the rest of the locals. Even if your team suffers a heartbreaking loss like Italy did this summer, the unparalleled experience of being a part of that athletic spirit just might be one of the best things you will do when you volunteer abroad.