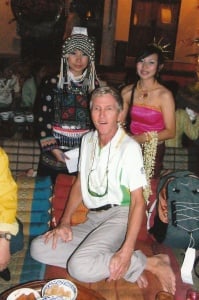 Don’t ask jetsetter David Papier what his favorite country is, because the 66-year-old won’t give you a direct answer. It’s not that he doesn’t want to answer the question. The truth is he really doesn’t have a favorite country.

“I find the good things in every country- whether it be the people, the food, the culture,” says Papier who has been teaching English abroad for more than 40 years.

Several of those adventures have been with GeoVisions, including an upcoming September trip to Italy. There David will be living with his host mom and dad, and two boys- ages 11 and 8 and tutoring them all in English. “I am so excited,” says David, who lives in Florida. “I have already started thinking of what gifts to bring them for welcoming me into their home- salt water taffy, books, t-shirts.”

David’s first journey with GeoVisions was to Costa Rica back in January 2011, teaching English abroad to tourist police. Since then he’s traveled to Vietnam, Belgium, and Ecuador with GeoVisions. He would also love to visit Austria, Germany and Cuba- which he visited in the 70s.

“I love meeting people from other counties and learning about their cultures,” he says. “When I travel, each experience is new and wonderful.”

David says traveling the world has helped him realize “our way isn’t the only way of doing things.” He believes that “other counties aren’t better or worse. Just different.”

From elementary school to universities, David has taught English abroad to all age levels. However, he really enjoys teaching fellow senior citizens. “At my age, I really don’t want to face a classroom of 14-year-olds. Twenty years ago maybe, but not at this point in my life,” he says.

David claims he has no fears of traveling alone, but admits it can be hard living in someone else’s home. “You need to strike a nice balance. Observe what they do and follow that. If they take off their shoes before entering the home, you should do the same.” 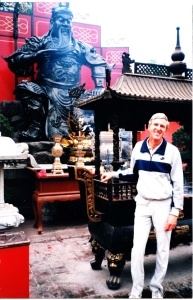 David loves to visit China, among other countries

David says he would definitely recommend teaching English abroad through GeoVisions, and has the following advice for future people teaching English abroad: Approach every experience with a smile and keep an open mind. Learn a little of the country’s language- such as greetings. Bring small gifts for the family as a “thank you” for welcoming you into their home.

Fun Fact: David does not take pictures on any of his trips. “I don’t want to become crazed with taking the perfect photo.” (Pictures are provided by his host families.)