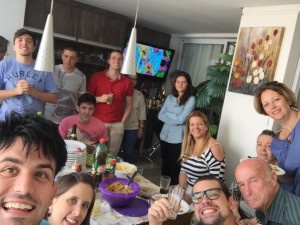 Bom Dia! Or Hello in Portuguese! My name is Brennan and I am from Newport Beach, California. I decided to tutor English abroad in Brazil because I wanted to improve my Portuguese and be immersed in Brazilian culture.  I have studied abroad in France and Germany before, and I was extremely interested in doing something similar in Brazil.

I Googled “Tutor English Abroad with family in Brazil” and I found GeoVisions. Two months later, I was getting on a plane to come to Brazil, and I really love it!

Brennan says Brazil has some of the "friendliest people in the world." He's met a lot of them while on his tutor English abroad adventure

Brazil has some of the friendliest people in the world.  They always have a smile on their face and are genuinely interested in talking with me. If I am lost, or trying to find something as random as Parmesan cheese in the supermarket, people go out of their way to help me.  Brazil is a huge country, it is bigger than the mainland United States, there are even places where it snows!

Brazil is very diverse too, just like the U.S., it is a cultural melting pot.  There are cities that look like they are in the German alps, and in São Paulo, close to where I am staying, there is an area called Liberdade and it is the biggest Japanese city outside of Japan. Brazil is the only country in the Americas where they speak Portuguese.  So it is the perfect place to improve your Portuguese skills.

My host family here in Brazil while I tutor English abroad is amazing! I am staying with Felipe, he is about to complete his post-doc program in bio-medical science. He is going to the U.S. to take a position at a university pretty soon after I leave Brazil. He works in his lab Monday- Friday, and he comes home for lunch.   In the evenings we have dinner, watch TV, talk and study English.

He is also helping me with my Portuguese.  During the day, I explore the city I live in, Mogi das Cruzes.  It is a medium size town 40 minutes outside of São Paulo. Felipe has also introduced me to awesome local friends here too.  I joined a local gym to stay fit and I practice my Portuguese as well by watching shows and movies in Portuguese on TV and on Brazilian Netflix. 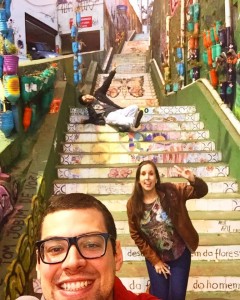 I am so lucky to have been placed here to tutor English abroad.  I have also tried some of the most amazing food I have ever tasted!  Brazilian food is heaven!!!   I’ve had churrasco, which is Brazilian BBQ, and these amazing little dumplings called Coxinhas. If you love meat, Brazil is amazing, but even if you're vegetarian, the people here are so accommodating and Brazil has amazing fresh fruits and veggies, like guarana that aren't in the U.S.

I came to Brazil not knowing anyone, but my host family has made me feel at home, and they are even traveling with me. Next week is my birthday and we are driving to Rio de Janeiro and staying on Copacabana beach.

Coming to Brazil to tutor English abroad through GeoVisions was an awesome decision and I would recommend it to anyone!