Today I noticed an article from The Vancouver Sun entitled The give and take of Voluntourism.

Tourists are increasingly likely to look for opportunities to do volunteer work while traveling abroad. Win-win? Perhaps. But some argue it’s become more fad than function.  Janet Steffenhagen of the Vancouver Sun did a great job at explaining what Voluntourism is, and raising some well-deserved flags about this method of travel.

The first question Janet raised was "whether voluntourism has become more fad than function."  It's an important question.

If you check out the travel section of the Sunday NY Times today, you will see that hotels and crusie lines are in the act now.  Even vacation resorts are providing a 2-hour experience, teaching kids to read, and labeling that "Voluntourism."  If you have an honest bone in your body, you know that isn't Voluntourism.  It's "cashing in" on what they think is something new.  And Voluntourism has been around since 1915...easily.

You can pound me all you want.  At least I'm being honest.  After doing this for 36 years, I come from a far different perspective than many others.  You can skew the numbers, you can phrase the survey questions anyway you like.  When you boil off all that fluff, this industry as a whole, provides an amazing first-class cultural exchange experience.  Do our Voluntourists help people and make life better for others and change lives?  Absolutely.  We value our Voluntourists and we are proud of them.  I'm just trying to put things into perspective.

I listened to a lot of people a few days ago talk about how they measure the "impact on the community" from their volunteers.  I heard about a dozen different ways.  And I'm thinking...if we have to work this hard to measure an obvious impact, and run it through another dozen filters at the University research level...I don't want any part of that.  And if we have to work that hard to measure it, maybe we're trying to make a silk purse out of a sow's ear.

So Janet:  Well done on that first question. 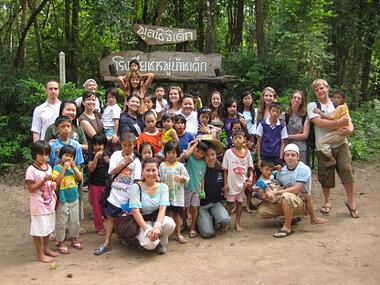 Janet quotes Daniela Papi, of The Education Abroad Network, who argues that in many cases they do not — "voluntourists just don’t stick around long enough to find that out.  Daniela recalled, for example, being part of a school group years ago that went to Cambodia to build a school, not knowing it would never be used because the community had no teachers.  You have to learn before you can help, so go abroad to learn.”

Later in the article, Janet quotes me.  But she says I disagree with Daniela.  I know Daniela...and I don't disagree.  OK...we disagree on some things, but I agree with Daniela that as Voluntourism providers, we have to provide an opportunity to exchange cultures...we have to learn about the people and community and project mission...before we can help in any sustainable way.

Having read the article again, I really want to meet Ruby Peppard and Don Warthe of the Quest for Community academy at Mount Sentinel secondary school.

"While Warthe and Peppard were pleased with the connections that students developed during these trips, they were troubled by the attitude among some that their lives were better than those they were serving and, hence, they could provide help. Those students were surprised to find at the end of the trip they had gained more than they had given."

Peppard described it as Western arrogance, adding: “We really wanted to combat that in a big way so we designed the program to teach the kids that the service they do isn’t about helping others. It’s about them, as young teenagers, being able to offer something for the opportunity to learn from others.”

If you are an Aid or Development organization, you can very easily measure the impact your organization is having on a community.  If you provide Voluntourism trips, stop deluding yourselves.  Focus on your volunteers and see what's going on with them.  It is THERE you will find sustainable and very positive outcomes.  If you're going to offer a 2 hour experience when people get off the cruise ship, or a 2 hour experience helping people read and that is the extent of it...you most certainly are not impacting ANYONE or ANYTHING other than the traveler.  You are calling it Voluntourism.  It isn't.  It's cultural exchange.  No more.  No less.

What do you think?  Use the comments section below to weigh in on your thoughts.  Voluntourism:  Function or Fad?