When Traveling Abroad You Should Visit Places Over And Over 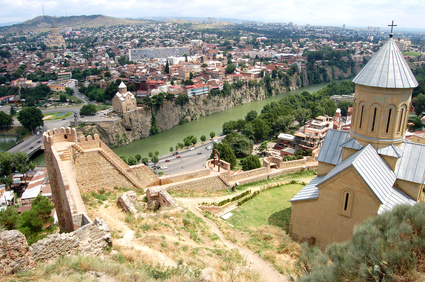 This is a guest post by travel blog writer, Kara Drake.  Some of our volunteers and teachers participate on programs with us multiple times.  If you teach English abroad or work or volunteer abroad with GeoVisions multiple times, there are substantial discounts given to the program fees.  So we thought Kara's post was a good one to remind travelers of the many reasons to go back and revisit some of those destinations multiple times.

My family is planning on going to Belgium for my husband’s next sabbatical and people keep asking us why. We were there on sabbatical in 2007, back for a visit in 2010, why would we want to go back? To try to answer them I tell them a story about, Georgia.

When I was in graduate school I had the amazing opportunity to travel on a grant to The Republic of Georgia. I was studying history and archival methods and a group of us were going to help the Georgian National Archives attempt to set up an electronic catalog so that researchers could have easier access. I had no idea what I was getting involved with. My friend Peter had mentioned he was going with a few historians and I just jumped in. I didn’t even know WHERE Georgia was. I assumed it was going to be all about borscht. All I knew was that I was going someplace raw and it was all new to me.

From the beginning it was a giant adventure. I flew Turkish Air where I was pleasantly surprised with the incredible food and disappointed that there was smoking in the back of the plane (cough, cough!). We were greeted by our new Georgian colleagues, set up in an apartment in a run down Soviet era building, walls crumbling all around. Completely jet lagged we set out to work at the archives, where we were warned we should NEVER use the facilities.

Every day we had three meals prepared for us by this sweet woman who knew no English. We knew no Georgian. But quickly I learned how to count to five (because nothing cost more than five Georgian lari), and I learned how to pronounce Vazha-Pshavela to taxi drivers taking us to the archives. One of the Georgian archivists spoke German so that is how we attempted to communicate. The biggest surprise was the food. It was a heavenly mix of spices and fresh flavors. I was in love. A big shock for me was that there was no blending in Tbilisi. I was used to European travel, getting mistaken for being Dutch or German. From my clothes to my hair I stuck out like a sore thumb and attracted all sorts of attention.

Fast forward two years. We were heading back to do some follow up work with the archives, to check on their progress and reunite with our friends. While the food remained heavenly, the city was completely upside down from the memories in my head. Instead of everyone driving run down Trabants there were Range Rovers barreling through the city center. There were actual restaurants and an Internet café! And there were tourists. It was clear that someone had let the cat out of the bag at how amazing this little country was. Oil money had invaded and on more than one occasion I saw people carrying handguns in their belt buckles. A new sort of energy surged through the city.

The changes that occurred in the two year time lapse between my visits to Tbilisi were dramatic. But it wasn’t just the city that had changed.

After two years I was going to Tbilisi a very different person. I was married, had started a career, had visions of a future. I don’t expect there to be dramatic changes in Leuven, Belgium when we return there for our sabbatical, but I expect that we will be bringing a lot of changes of our own.

Returning to a place you have already been can be shocking and familiar at the same time. So, just because you have been somewhere once before don’t turn down the opportunity to return. You may find yourself very surprised.