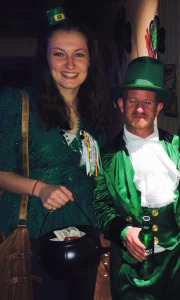 To all our friends at home, and those working abroad- Happy St. Patrick’s Day!

It’s a day to remember Saint Patrick, who is widely known as the "Apostle of Ireland," and to celebrate the heritage and culture of the Irish.  However, you definitely don’t have to be Irish to take part in the festivities.  After all, aren’t we all a little Irish on March 17th?

Here in the United States, St. Patrick's Day is celebrated with parades, shamrocks, beer and lots of green.  But how about in Ireland itself?  Recently I interviewed Áine (pronounced awn-yah) McKeever, a fellow student at Quinnipiac University, who was born and raised in Derry, which is about three hours north of Dublin. 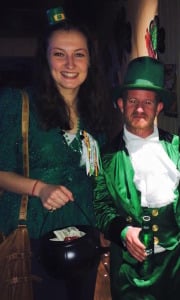 Growing up, Áine remembers celebrating St. Patrick’s Day by going to Mass with her family, followed by a roast dinner.  She says traditionally, March 17th is a religious holiday in Ireland – not just a reason to drink and party.  It’s a day to commemorate the life of St. Patrick, who introduced Christianity to the island.

However, over the years, Áine believes the holiday has lost some of its religious sentiment, and has veered more towards celebrating the Irish heritage and culture. This began in the late 1990s, when traditional parades and feasts gave way to more American-style celebrations.

“When I was 17, we dressed up in green and went to bars, just like we would in the U.S,” she recalls.

This past weekend, Áine attended the St. Patrick’s Day parade in Boston and had a blast.

“I appreciate other cultures celebrating my culture.  I am so proud of my heritage.”

However, Áine did get a chuckle out of all the people sporting Scottish kilts, which is “definitely not traditional.”

Irish or not, St. Patrick’s Day is universal and can be appreciated by all cultures around the world.

Has all this Irish talk given you the travel bug for Ireland?  Be sure to check GeoVisions AuPair in Ireland program if you want to work abroad and get paid.

St. Patrick's Day By The Numbers: