Founded in 2001, GeoVisions' Co-Founders brought over 80 years of combined experience in international education and cultural exchange.

When The GeoVisions Foundation was founded in 2006, Key Staff had over 117 years of combined service.

At the same time, we’re young enough to know what’s needed in the twenty-first century, and old enough to have learned what’s not needed. As one of our co-founders recently said, “Sometimes it isn’t what’s “in the cloud” but what’s “below the cloud” that makes the difference.” 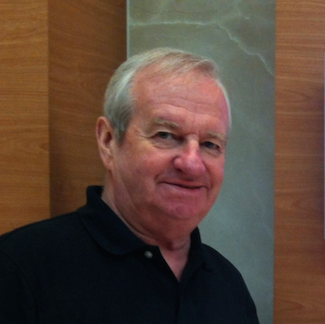 Co-Founder. Since 1974, Kevin’s major commitments have been opening exchange programs to those who have been underserved by many larger organizations especially in Asia and the Middle East.

Director of Programs. Rebecca started her career bringing high school students to the US to study. At GeoVisions, Rebecca brought her talents in programming and operational detail and is responsible for all of our programs. 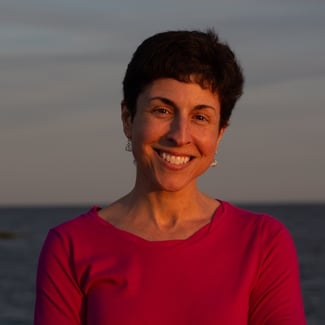 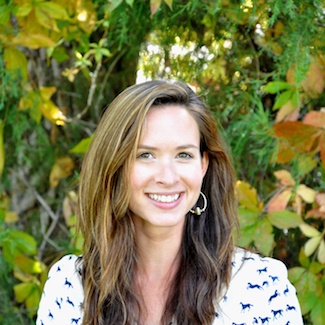 Community Manager. Alex takes care of all of our social media channels, Blog posts and handles all of the activity at our Alumni Association. Alex is also the founder of Howl Often, a community of women who inspire each other to get out in nature for self-empowerment.

Enrollment Advisor Ann has been with GeoVisions Foundation over six years. She knows each of our programs forwards and backwards. She advises future participants on how to choose the experience and adventure that is perfect for them.

Director of Operations Sara takes care of every detail of each application, flight, insurance card, visa application. If it involves participants getting to their program and being placed with accuracy, Sara is involved with it.

GeoVisions enjoys a diverse team of support from many areas outside of our Global Headquarters in Guilford, Connecticut.

Our Help Me Teach desk is headed by Betsy Bruneau (also an ESL teacher) here in Guilford. Our Marketing gurus, CoForge Marketing, are also here in Guilford, Connecticut. Online analytics and Search is managed in Pennsylvania by Chris Middings.

Our staff here and remotely are vested in our mission and vision.

A Great Place To Work 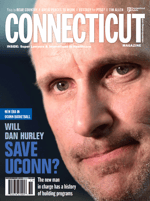 In November, Connecticut Magazine featured the GeoVisions Foundation in their "Best Places To Work" edition.

For the first time, the Magazine focused on 4 "Super Workers" to tell the "rest of the story" on how these four leaders go the extra mile as part of their daily contributions to their work and community.

We're proud that one of those four leaders who selected is our very own Executive Director, Randy LeGrant.

Here is the text of the article:

LeGrant couldn't have imagined what he tapped into back in when he helped bring international college students to the U.S. on the State Department run Summer Work and Travel program. They would come over, work at a theme park or resort for the summer, then go back. It was a diplomatic effort, but teaching them English was paramount. The hope was they would go home thinking more highly of Americans and our way of life, having improved their English.

"The natural next step was, let’s send Americans over there,” LcGrant says. "Everyone wanted native English speakers to teach them English. In 2006 we decided we would start sending English teachers abroad as a sort of reciprocity. It made sense to us." What also makes sense is the reason why the demand for English teachers increased, even if LeGrant didn’t see it coming. 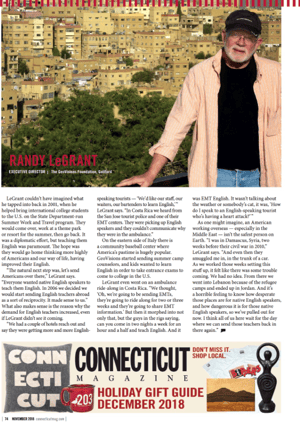 “We had a couple of hotels reach out and say they were getting more and more English speaking tourists — ’We’d like our staff, our waiters, our bartenders to learn English,’ ” LcGrant says. "In Costa we heard from the San Jose Tourist Police and one of their EMT centers. They were picking up English speakers and they couldn't communicate why they were in the ambulance. "On the eastern side of there is a community baseball center where America’s pastime is hugely popular. GeoVisions started sending summer camp counselors, and kids wanted to learn English in order to take entrance exams to come to college in the U.S. LeGrant even went on an ambulance ride along in Costa Rica. “We thought, ‘Oh, we're going to be sending EMTs, they’re going to ride along for two or three weeks and they’re going to share EMT information.' But then it morphed into not only but the guys in the rigs saying, can you come in two nights a week for an hour and a half and teach English. And it was EMT English. It wasn’t talking about the weather or somebody’s cat, it was, ‘How do 1 speak to an English-speaking tourist who's having a heart attack?’ As one might imagine, an American working overseas — especially in the Middle East — isn’t the safest person on Earth. “I was in Damascus, Syria, two weeks before their civil war in 2010," LcGrant says. “And even then they smuggled me in, in the trunk of a car. As we worked those weeks setting this stuff up, it felt like there was some trouble coming. We had no idea. From there we went into Lebanon because of the refugee camps and ended up in Jordan. And it’s a horrible feeling to know how desperate those places are for native English speakers, and how dangerous it is for those native English speakers, so we've pulled out tor now. I think all of us here wait for the day where we can send those teachers back in there again."